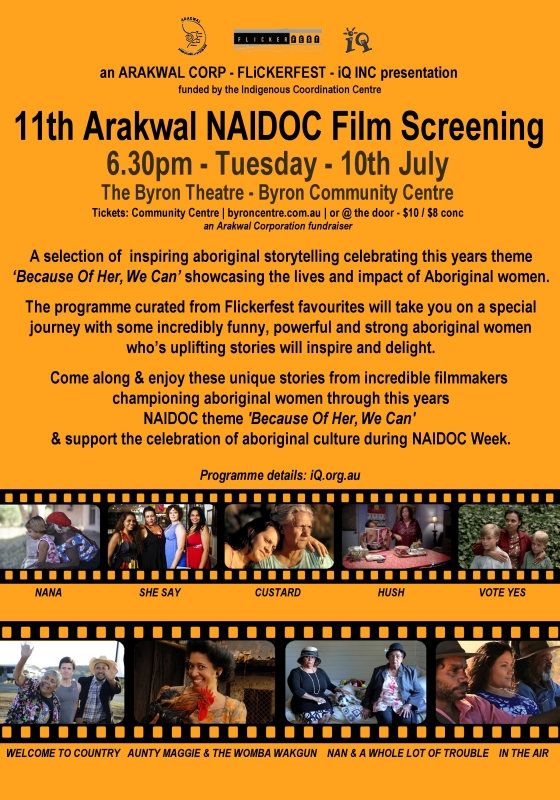 The Arakwal Corporation, Flickerfest & iQ Inc are thrilled to present an inspiring evening of aboriginal storytelling celebrating NAIDOC Week 2018 and this years theme ‘Because Of Her, We Can’ showcasing the lives & impact of Aboriginal women.

This year’s programme curated from Flickerfest favourites will take you on a special journey with some incredibly funny, powerful and strong aboriginal women who’s uplifting stories will inspire and delight.

The filmmakers have become some of the leading lights in indigenous filmmaking, blazing brightly on Australian screens and stage.

Come along & enjoy these unique stories from incredible filmmakers championing aboriginal women through this years NAIDOC theme ‘Because Of Her, We Can’; & support the celebration of aboriginal culture during NAIDOC Week.

WELCOME TO COUNTRY – 10min
Writer/Director: Dean Gibson | Producer: Helen Morrison
When a hotshot public servant is sent to a remote Aboriginal community to prepare for t he Prime Minister’s visit, he quickly learns the true meaning of Welcome to Country. starring Alec Doomadgee.

NANA – 6min
Writer/Director: Warwick Thornton | Producer: Kath Shelper
Nana’s granddaughter thinks Nana’s pretty special. She loves her Nana because she helps the old people, she’s a good painter and other people love her too. Nana’s got everyone under control.

CUSTARD – 6min
Writer/Director: Michelle Blanchard | Producer: Kath Shelper
In her search for answers, a granddaughter’s questions lead to the discovery of self and a chance to embrace the complexities of family.

IN THE AIR – 13min
Writer: Dot West | Director: Kimberley West | Producer: Jodie Bell
Jealousy is a curse. She’s her own worse enemy, jealous, impulsive, sabotages herself, awake or asleep, in snagging her man, who is a reluctant player when it comes to messing with his little piece of paradise.

HUSH – 5min
Writer/Director: Dena Curtis | Producer: Kath Shelper
Ethel and her friend Mary resort to an unlikely occupation at night to top up their pensions. Ethel’s daughter is horrified when she discovers they are not really “playing cards”.
Come & celebrate aboriginal culture in NAIDOC week with a programme of amazing films.