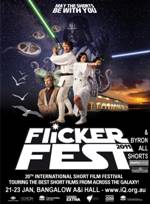 This year Flickerfest received 1793 entries, of  which 108 were selected for the final competition from all around the world.

Byron Flickerfest, & Byron All Shorts are presented with the iQ Arts & Eco Centre, and is a fundraiser for iQ Inc.

The ‘Byron All Shorts’ competition will celebrate the film making talent in the Northern Rivers region and encourage audiences to experience the many local stories that are produced in the region each year.
This competitive local programme will screen on the 22nd January 5pm alongside the Byron Flickerfest 3 day screening’s of the best of the worlds short films.

‘Be Inspired’ 2min
Dir/Wri: Jo Lange
Prod: Olivia Feng
A photographer in search for an intriguing composition wanders through the woods as he suddenly seems to find inspiration in the appearance of a mysterious figure. Only the figure is not made of flesh & bone, but of lead & chalk.

‘Impact’ 6min
Dir: David Swann
Wri: Fiona Eagger/Deb Cox
Prod: Ree Evans
Impact is a mini documentary about the confronting reality of the fall out from fatal road accidents. The film was created with a group of Northern Rivers youth who shared their stories about how road trauma has affected their lives.

‘The Caretaker’ 15min (out of comp)
Dir/Wri: Alanna Rose
Prod : Jade Rose
The Caretaker is a moving account of a unique sporting history many Australian Indigenous boxers experienced during the last century.

The Byron All Shorts screening will be on Saturday afternoon at 5pm with announcement of the winner at the Sunday night Flickerfest screening.