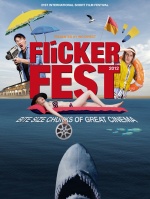 “Bite Size Chunks Of Great Cinema”
Celebrating 21 years of short film excellence Flickerfest Australia’s leading short film festival will return to the Byron region for its 14th year in 2012 hosted by local organisers IQ Arts & Eco Centre, presenting another award winning programme of the best of Australia’s and the worlds short films, all screening at Bangalow A&I Hall from the 20th-22nd January. Flickerfest remains Australia’s only Academy®Accredited and BAFTA recognised short film festival ensuring that we continue to present a A-list class short film competition recognised amongst the best in the world.

A record 2200 entries were received for Flickerfest 2012, and a selection of the top 100 shorts were selected in official competition, all handpicked to represent the most innovative, creative and cutting edge short films being produced in the world today. This impressive and unprecedented number of contenders from all round the world confirms FLICKERFEST’s reputation as Australia’s largest and most respected short film competition.

Byron Shire is the first stop on our 37 venue National tour where we will be screening an entertaining, inspiring and award winning range of highlights many of which are world or Australian premieres, giving local Flickerfest audiences the first look at the hottest short films in the world today. For many films, the FLICKERFEST festival will serve as their world and/or Australian premiere whilst other films have already taken home some seriously prestigious prizes – the calibre of this year’s program is undeniable with several films screening at some of the world’s most prominent and revered film festivals including Sundance and Cannes.

International 1 programme highlights include two short films recently shortlisted for the 2012 Academy®Awards, the moving and humorous ‘I Could Be Your Grandmother’ (view trailer) from France and the intimate and heartfelt drama ‘Raju’ (view trailer) from Germany following a couples journey to India to collect their adopted child. Also screening is ‘The Palace’ a moving political drama set in Cyprus recently awarded the MNC award for Best Australian Short film at Flickerfest 2012.

Byron Flickerfest, & Flickerlab are presented with the iQ Arts & Eco Centre, and is a fundraiser for iQ Inc.

Direct from Sydney and our one-day intensive, taking place alongside our Flickerfest presented by ING DIRECT 2012 Byron Tour (20th -22nd Jan 2012 A and I Hall Bangalow), Flickerlab will present the latest trends, tips and skills that you need to develop your creative idea and turn it into a reality and to build a successful and sustainable career in the film industry. Flickerlab Byron will be bringing key industry practitioners to give you the most up to date insight into production and distribution routes for emerging filmmakers. Plug in for this intensive session and experience the knowledge and wisdom of our leading filmmaking experts as they take you on a journey through making your film idea a reality. This is a unique networking opportunity and a first-time chance to improve you knowledge and skills to achieve a successful and sustainable career in the film industry, presented by Australia’s leading short film festival.

Flickerfest is passionate about supporting Australian filmmakers and providing career development initiatives and Flickerlab will now further formalise this commitment assisting Australian short filmmakers to experience the latest industry expertise that will assist them in their craft. Flickerlab Byron will be bringing key industry practitioners to give you the most up to date insight into production and distribution routes for emerging filmmakers.

Emma Moroney, Supervising Producer from Movie Network Channel. Emma is most recently responsible for acquisitions and management across Movie EXTRA Webfest an online competition offering filmmakers the opportunity to produce a 6 part web series in partnership with Screen Australia with 100,000 in investment offered to the winning series.

Bronwyn Kidd, Flickerfest Director, who is also in charge of Flickerfest short film distribution arm representing over 180 short films for sales across all platforms worldwide.

Lisa Shaunessy, Independent producer, she was formerly the Creative Executive at Hugh Jackman’s Seed Productions, with feature credits as development executive that include Deception and X-Men Origins: Wolverine; as well as the television series An Aussie Goes Barmy, Bolly and Calypso for Fox 8. Now Head of Development & Production at Chaotic Pictures, a production company she established in 2009. At Chaotic Pictures, Lisa co-produced John Winter’s feature film, Black White & Sex, and is currently developing several features films and television series’.

Taking place over 2 hours Flickerlab will cover the following areas:
Making It Happen
Behind every film is the producer/s, an elaborate and all consuming role that varies dependent on the focus of the individual. From creative producers, to hands on line producers, to executives- no two producers share the same approach. What they do share is the ability to pursue the macro whilst manage the micro, creative and financial muscle, and inexhaustible energy, drive and commitment to realising the film- they are the first person on, and the last person off. This discussion will follow the processes of development, financing, production and distribution from these producers perspectives, and offer alternative, unique approaches to source funding, as well as innovative new approaches to production in the age of the trans media storyteller.

The ‘Byron All Shorts’ competition will celebrate the film making talent in the Northern Rivers region and encourage audiences to experience the many local stories that are produced in the region each year.
This competitive local programme will screen on the 21st January 5pm alongside the Byron Flickerfest 3 day screening’s of the best of the worlds short films.

Finalists selected for competition in Byron All Shorts are: 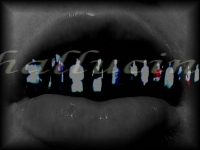 WINGS: 13:02min
Dir: Ly de Angeles & Victoria Sullivan / Wri: Ly de Angeles / Prod: Alex Tinley &, Ly de Angeles / DoP: Paul J Warren / Prod Design: Maggie Schreiber / Edit: Stefan van Jaarlsvelt / Sound Design: Tom Armstrong
The angel of death is the most misunderstood of all angels.
He attends sessions with a psychiatrist, seemingly depressed.
While still carrying out his eternal duties of attending death and helping souls with afterlife options he also dabbles in the odd cause of death.
Eventually he presents a radical solution to the psychiatrist: the surgical removal of his wings is the only way, he informs her, that he can have a ‘normal’ life.
In reality he gains great pleasure from his work and the reality is that the psychiatrist is on life support after a car accident and he is simply waiting for her.
The story was always all about her and the angel has been honest from the beginning.

iQ-Flickerfest Jury Award for Best Short Film
THE COTTAGE: 12:44min
Dir: Lorraine Bell / Prod: Rani Willis
A doco highlighting the role of the Fletcher St Cottage plays in the lives of the underprivileged & the broader community

THINK OUTSIDE THE BOX: 1min
Dir: Stefan van Jaarsveld / Prod: Sai Frame
Think Outside the Box asks the audience to think again about their daily use of packaging, plastics and other non-recyclables. The consequences can be dire – “pay for the product… not for the packaging!”

HEAD FOR THE HILLS: 8:44min
Dir/Wri/Prod: Wendy Andrews
“Let yourself be silently drawn by the strange pull of what you really love, it will not lead you astray” ….a film that embodies THE WORDS OF 13th century sufi poet Rumi’

Byron All Shorts is presented with the iQ Arts & Eco Centre, and is a fundraiser for iQ Inc.
See & support our local film-makers alongside the best in the world.