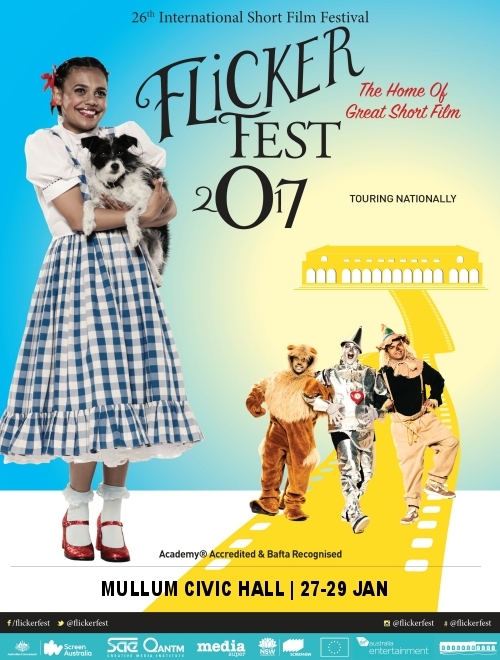 Run-time: (approx 110min each session) Classification: (under 15yrs to be w/adult)

Tickets: * Please Note: Moshtix online sales close 1 hour prior to each screening (but tix are then available at the door)

All sessions approx 110 mins (Classification: under 15yrs to be w/Adult)

Celebrating its 26th year, Flickerfest, Australia’s leading Academy® Award accredited and BAFTA-recognised Short Film Festival, and the country’s largest Australian & International short film competition, screens the best of shorts from Australia and around the globe; ensuring the presentation of A-list short film programmes recognised amongst the best in the world.

Flickerfest screens for 10 days under the summer stars at Bondi Beach from 6-15 January 2017, with selected highlights the most entertaining and innovative short films from around the world touring Australia on a 50+ venue national tour from Jan – May 2017; with Byron shire being one of the first screenings after Bondi.

Flickerfest is screening for its 19th year in the Northern Rivers region in 2017 and will celebrate its 26th birthday since the festivals 1st ever screening in Balmain, Sydney back in 1991.

The Flickerfest 2017 tour will take place at it’s new home of the air-cooled Mullum Civic Hall, screening a smorgasboard of the worlds and Australia’s best shorts over one big weekend handpicked from a record 2,400 entries.

Come celebrate amazing independent film-making in Mullumbimby from the 27-29 Jan.

Following the Opening Party, Flickerfest is thrilled to present its Best Of International 1 Shorts programme, a selection of film gems from our  Academy® Accredited Sydney competition.
Highlights include the moving and insightful ‘Nocturne In Black’ from Lebanon, (view trailer) ‘In a war-ravaged Middle Eastern neighbourhood, a musician struggles to rebuild his piano after it is destroyed by Jihadists’; and the delightfully heart-warming ‘Timecode’ from Spain, (view trailer) ‘Luna and Diego are the parking lot security guards. Diego does the night shift, and Luna works by day, will they ever meet?’ Both films are shortlisted for the 2017 Academy® Awards.

Also returning is Byron All Shorts, for the 12th year presenting the best of local shorts from the Northern Rivers; encouraging audiences to experience the many amazing films & local stories that are produced in the region each year. 16 local short films will screen across this 120-minute programme. Highlights include ‘In A Cane Field‘ In a beachside tourist town the body of a fifteen-year-old girl is found in a cane field. Her murder is a mystery that envelops the community ‘Lift Me Up‘ Mullumbimby musician Chris Mallory of ‘Two Lions’ shares his passions, dreams and musical endeavours within the broader community ‘Gomeroi Voices‘ The proposed Shenhua coal mine in the Liverpool Plains of NSW Australia threatens ancient Aboriginal heritage. Find out what’s at stake…and ‘Uber‘ Sheldon, Sam, Pat & Aunty Rae discuss the merits of Uber…services…

Join us as we celebrate a diverse range of stories from across Australia that celebrate our unique identity and culture with our Best Of Australian Shorts programme, Highlights include ‘Messiah’ written & directed by Damian Walshe-Howling, (view trailer) ‘In a playful collision of cultures, a hapless Irishman and his Parisian girlfriend get more than they bargained for when they encounter a particularly mischievous stranger (David Gulpilil) in the spectacular Australian wilderness’. Also included is the fun short ‘The Spice Sisters’ starring local comedian Sandy (Ghandi) Arunha. Rohini ‘A former Bollywood actress, is bored and restless with her life. When a popular reality cooking competition issues a call for entries, Rohini decides it’s now or never to make a change’.

Enjoy an evening of laugh out loud comedy from Australia and across the world with the Short Laughs Comedy programme, Highlights include the hilarious ‘5 Tales About Technology’ from Canada, (view trailer) an anthology short that takes a darkly comic look at the absurd realities of how modern technology affects our daily lives; whilst ‘Facon’ from Australia is a funny and quirky insight into our modern diet, ‘Tia is an avid meat eater who is strictly a vegan hipster in public. When Tia’s judgmental vegan boyfriend invites himself to her family birthday party, Tia must find the courage to tell him her secret’; and oddball comedy ‘Twinsburg’ from USA, (view trailer) shines the spotlight on a Midwestern town founded by identical brothers where thousands convene for the world’s largest gathering of twins.

Don’t miss this one-off chance to see this and other amazing shorts before they continue their journey around the world; curated from the Flickerfest competition screenings at Bondi; expect to experience the best in short film-making Australia & the world has on offer.

In a FLiCKERFEST first, the trailer features an all indigenous cast and crew with a Wizard of Oz theme descending on Bondi Beach. Directed and written by award-winning indigenous director Dena Curtis & produced by Mitch Stanley, the trailer stars the delightful Miranda Tapsell as Dorothy, Christine Anu as the Good Witch and Jeremy Ambrum as the Lion, Bjorn Stewart as the Tinman, Meyne Wyatt as the Scarecrow & Alexis Lane as Wicked Witch.

The Byron All Shorts screens on Saturday 28 Jan, with 16 finalists from the Northern Rivers region hotly contesting for prizes that recognise excellence in short film making.

The Byron All Shorts programme is an amazing showcase of approx 120min of the best of local short films & screened to a capacity house of 330 people last year.

(The awards presentation is on Sunday night prior to the Best Of Australian Shorts programme).

THE JURY: Byron All Shorts will be judged at the screening by an esteemed jury of industry practitioners including:

Mandy Nolan (Artist/Comedian/Writer)
Multi-talented, accomplished comedian, artist and journalist. A stand up comedian for well over 28 years, & self proclaimed expert on all matters feminine. Nolan has also been a contributor for Wendy Harmer’s Online magazine The Hoopla and has been a featured guest on ABC’s Q&A and SBS’s Mums The Word.
A thrice published author Nolan’s previous titles with Finch include ‘What I Would Do If I Were You’ & ‘Boyfriend’s We’ve all Had and Shouldn’t have.’ Sydney Morning Herald’s Bruce Elder called Nolan ‘the country’s sharpest and wittiest comedic columnist’. In 2015 alongside an 8 date East Coast book launch she also appeared at Bellingen Writers Festival, Byron Writers Festival, Melbourne Writers Festival and the Romance Writers of Australia Conference.

Anne Chesher (Producer/Lecturer)
Creative Media Producer for the film and television industry and also Senior Lecturer and Acting Head of Film at SAE Creative Media Institute. Anne was instrumental in establishing National Geographic Channel in Australia on the Foxtel platform from its launch in 1997. During recent years Anne has produced curriculum based interactive creative media for broadcast drama, documentary and online platforms on award winning projects such as Showtime’s Tim Winton’s Cloudstreet, SBS’s Go Back To Where You Came From, ABC’s Mabo and online ABC Splash.
Anne is also Associate Producer for Gibbs Media working with an executive team developing fifty-two animated episode series and multiplatform features of the Australian iconic book Snugglepot and Cuddlepie for Australian and global television markets.

David Bradbury (Documentary Filmmaker)
Two-time Academy Award-nominated director and producer, a documentary legend whose films have taken us around the planet and deep into the heart of individuals with extraordinary stories about war, uprising, injustice and exploitation.
David is the sole creative force behind ground-breaking documentaries such as “Frontline” about war cinematographer and correspondent Neil Davis who covered the Vietnam war for 11 years, “A Hard Rain” and “Blowin’ In The Wind”, both exploring the impact of ‘depleted’ uranium in the Gulf war. And his most recent film, “The Crater”, about Vietnam War conscript Brian Cleaver’s redemptive journey to locate the missing bodies of 42 enemy soldiers Cleaver’s company killed in one night during the war.

Thank you & congratulations to all entrants; below are the finalists selected from almost 60 entries.

Our Land / 5m6s / 2016
Wri/Dir/Prod: Kaitlyn McMurtry (Hanson Productions)
A film celebrating the lives of young Australians in a world full of negativity. This film tackles the generational discrimination that occurs; to show the beauty of the next generation.

The Fine Art Of Being Zion / 4m / 2016
Wri/Dir/Prod: Susie Forster
When one man’s unexpected talent surpasses all his mother’s expectations

Got Your Marbles / 21m22s / 2016
Wri/Dir: Irene Fuez
Magic happens at a retro event where anyone could be a winner. The Australian marbles championship happens once a year at the Old & Gold, Simple Pleasures festival in Brunswick Heads. This heart-warming documentary follows the story of some unlikely local heroes as they knuckle down to compete.

Quack / 4m40s / 2016
Wri/Dir/Prod: Nicole Sullivan
A young man heads out for his weekend sport of duck hunting when his world collides with an innocent nature lover.

In A Cane Field / 16m59s / 2016
Wri/Dir: Emily Avila | Prod: Emily Avila & Coralie Tapper (Cosmia Films)
In a beachside tourist town, the body of a fifteen-year-old girl is found in a cane field. Her murder is a mystery that envelops the community as those close to the girl grapple with death, in all its senselessness.
Based on the short story ‘The Serrambi Case’ by Brazilian author, Frances de Pontes Peebles.

The Ghost In The Machine / 3m / 2016
Wri/Dir/Prod: Sophie Hexter, Poppy Walker (H.W. Collective)
An act of surrender in the search for liberation, artist Jeremy Hawkes unleashes the ghost within.

The Word: Love Looks Like – Abe Nouk / 6m41s / 2016
Wri/Dir: Darius Devas, Timothy Parish |Prod: Adam Farrington-Williams
Over the past decade, spoken word slam poetry has exploded across Australia.
This film is part of a series that follows a new generation of poets and the inspiration behind their work.

Hazy Perspective / 6m4s / 2016
Wri: Darren Sharman | Dir: Nathan Tommasi
Prod: Alastair Vann (SAE Byron) (Visual Sub Culture)
RDT’s – A road safety campaign or cultural war? Do the current charges and penalties fit the crime? One side of the story will determine that to be the case, but are we about to see the laws change?

Hitch / 10m38s / 2016
Wri/Dir/Prod: Sophie Hexter, Poppy Walker (H.W. Collective)
A young, deaf boy wanders alone, through a remote Australian landscape. A mysterious man pulls up in a ute, to offer him a ride. Equal parts suspense and coming-of-age, HITCH explores loss and acceptance in a silent world, where nothing is as it appears to be.

The Winsome / 7m23s / 2016
Wri/Dir/Prod: Chris McGuiness
A look at Lismore’s iconic pub The Winsome, that has been turned into a soup kitchen and homeless shelter.

The Byron All Shorts are held on Sat 28 Jan. These amazing local films screened to a capacity house, with finalists from the Northern Rivers region hotly contesting for prizes, that recognise excellence in short film making.

The Awards & Winners are: