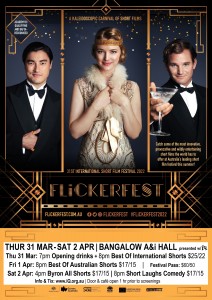 Run-time: (approx 110min each session)
Classification: (under 15yrs to be w/adult)

(online sales close 1 hour prior to each session)
Tickets also available at the door.

*Cashless transactions for Tickets at door & Cafe (*only)!
– Parking available in the Showgrounds

Flood Recovery Fundraiser: Flickerfest Bangalow & Byron All Shorts 2022 is a fund-raiser for local flood recovery for the Koori Mail’s rebuild and recovery of many indigenous families throughout the Bundjalung nation and the Mullumbimby Neighbourhood centres local rebuild and recovery initiatives. 100% of profits from ticket sales across the weekend will be shared between these organisations.

Flickerfest & Byron All Shorts is presented with iQ Inc.

Celebrating its 31st year, Flickerfest, Australia’s only Academy® Qualifying and BAFTA-recognised short film festival, and the country’s largest Australian & International short film competition, screens the best of shorts from Australia and around the globe; ensuring the presentation of A-list short film programmes recognised amongst the best in the world.

Flickerfest screened for 10 days under the summer stars at Bondi Beach in late January 2022, now selected highlights of the most entertaining and innovative short films from around the world are touring Australia on a 50+ venue national tour from Feb – Oct 2022; with Byron shire being the first screenings after Bondi.

Flickerfest is screening for its 25th year in the Northern Rivers region in 2022 and will celebrate its 31st birthday since the festivals 1st ever screening in Balmain, Sydney back in 1991.

The Flickerfest 2022 tour will take place at the A&i Hall, screening a smorgasbord of the worlds and Australia’s best shorts over one big weekend handpicked from a record 3,200 entries received from over 100 countries for Flickerfest Bondi.

Join us as we celebrate our 25th year in the Northern Rivers to launch our festival of short films in style with a catered opening night party including complimentary tasty snacks & drinks from our partners Rosnay Organic Wines, Gage Roads Beer and Parkers Organic Juices.
…followed by…

Following the Opening Party, Flickerfest is thrilled to present its Best Of International Shorts programme, a selection of film gems from our Academy® qualifying and BAFTA recognised competition in Bondi.
Programme & highlights include: the delightful New Zealand comedy Space Invader that tells the story of young Max who loves three things, hanging out with his dad who’s his best mate, Star Wars and baked beans and the delightful and heart warming UK drama Roy, where a reclusive widower Roy (BAFTA winner David Bradley, Broadchurch, Harry Potter) passes his days cold calling strangers until a chance meeting with a young woman Cara (Oscar winner Rachel Shelton) see an unlikely friendship forged.

Flickerfest is thrilled to celebrate a diverse range of stories from across Australia that celebrate our unique identity and culture with our Best Of Australian Shorts programme, selected from 7 programmes in our Academy® Qualifying competition in Bondi.
Programme & highlights: the intimate and moving surf drama Beautiful They, by local director Cloudy Rhodes, who grew up in Mullumbimby and now lives in Lennox Head, finely crafted thriller Run South produced by and starring Possum Creek resident Paul Henri, who grew up in the area, and sibling drama You And Me Before And After starring Yael Stone (Orange Is The New Black) and Emily Barclay (Baby Teeth), produced by Liam Heyen, who grew up in Myocum, These locally connected shorts screen alongside other Flickerfest favourites, including quirky black space comedy The Home Team starring comedy legend Paul McDermott and acclaimed actress Tara Morice (Strictly Ballroom).

Also returning is Byron All Shorts, for the 17th year presenting the Best Of Northern Rivers Shorts; encouraging audiences to experience the many amazing films & local stories that are produced in the region each year. Around 15 local short films will screen across this 105-minute programme which will celebrate an incredible range of themes and stories. Byron All Shorts is judged by an esteemed jury of local Northern Rivers industry practitioners. The awards ceremony will be held 15-20mins after the screening (time to allow the Jury to decide the winners) & will conclude by 7pm.
Programme & highlights: local director Luca Fox’s moving story about two brothers You Know How He Is shot in Mullumbimby and starring a cast of local young actors, the uplifting eco documentary Loggerhead shot in Fingal head and following the local communities moving fight to save the Loggerhead turtle and The Rockpool Waltz by 15 year old Lennox head resident Marlon Denning, which was awarded Best High School film at the SAE FlickerUp Youth competition at Flickerfest Bondi.

Enjoy an evening of clever comedy from Australia and across the world with the Short Laughs Comedy programme.
Programme & highlights include: the delightful comedy Don Vs Lightning, starring the legendary Peter Mullan as Don, who just wants a quiet in the Scottish highlands, alas life has other plans, Nash Edgerton’s clever comedy Shark starring Rose Byrne and hilarious UK Canadian animation Affairs Of The Art, recently nominated for an Oscar
The Flickerfest team – Bronwyn Kidd (Festival Director), Shane Rennie (Production & Tour Manager) & Amy Hoogenboom (Production Coordinator) – Northern Rivers and Mullumbimby residents are always thrilled, after delivering their 10 day Bondi festival to bring the Flickerfest tour home to their local region and to present the 45 venue national tour across Australia.

Don’t miss this one-off chance to see these amazing shorts before they continue their journey around the world; curated from the Flickerfest competition screenings at Bondi; expect to experience the best in short film-making Australia, the world & the region has on offer.

Check out the Flickerfest 2022 Tour trailer

We are thrilled to share our official Flickerfest 2022 Festival trailer celebrating yet another ode to an iconic film, our very own tribute to Baz Luhrman’s iconic classic ‘The Great Gatsby’. Set in 1922 The Great Gatsby illuminates the roaring 20’s and the revelry of life post the great war and the Spanish Flu pandemic, with parallels to our own contemporary experience with Covid-19. Now 100 years on the Flickerfest 2022 trailer presents our very own take on this classic story of excess, glamour and love after challenging times.

Also being presented is the Best of Northern Rivers Shorts at the Byron All Shorts finalist’s screening, selected from around 50 entries each year, showcasing a wonderful new collection of creative shorts from our very talented local filmmakers on a range of themes that reflect Northern Rivers life including drama, environment, surfing, music, comedy, love and everything in between.

The Byron All Shorts screens on Saturday 2nd April, with finalists from the Northern Rivers region hotly contesting for prizes that recognise excellence in short film making.

*The awards presentation is on Saturday 2nd April, 30mins after the Byron All Shorts screening & will conclude by 7pm.

To Be Or Not To Be / 5min / Cudgera Creek
Dir/Wri/Prod: Jake Frazer
Two young brothers battle to survive hardship. The outcome; two diversely different mindsets.

hildren Of Nature / 5min / Goonengerry
Dir/Wri/Prod: Zoe Morison
The journey of two sisters with a wholesome relationship but find themselves growing apart. They eventually reconcile, becoming closer again, before the older of the two drowns in the river. The younger sister is grief-stricken, but through nature, she heals and returns to the river to reflect on what she has learned from her loss.

Tribe / 6min / Nimbin (Jury Special Mention – BAS 2022)
Dir/Wri: Simon Adams | Prod: Circus Arts Australia & Mirth Production
Tribe ‘The thing that bonds us are what we do together’
Travelling along the railway to meet friends only to be confronted by others, ‘the tightrope of youth and surviving and thriving’. A showcase of local youth and exposé of their Circus skills.

The Long Road Home / 4min / Kingscliff
Dir/Wri/Prod: Katie Tonkin | Prod: Molly Phillips
Bev was part of the Stolen Generation. Raised in a mission against her parents’ will, she fought against the odds to become who she is now.

You Know How He Is / 6min / Mullumbimby
Dir/Wri: Luca Fox | Prod: Natalie Grube
When 10 year old Otis is given the task of looking after his autistic younger brother, a game of tag with friends becomes a test of his integrity.

Jazmin / 4min / Clunes (Jury Special Mention – BAS 2022)
Dir/Wri/Prod: Nicole Sullivan
Jazmin Theodora, 83 is A Nimbin Local Legend and Tarot reader. Jazmin uses her physic abilities to get people in touch with who they are. Her story is about always being yourself. Own who you are and be proud of who you are, regardless of your age. A strong, passionate woman, Jazmin’s zest life shines through inspiring others to live their very best life.

The Oceans Keeper / 6min / Byron Bay
WrI/Dir/Prod: Gabriella Leckenby | Wri: Alessandra Salviani | Prod: Tara Davies
A young girl shares her thoughts about the most important day of the year, in the worst year of her life.

The Lighthouse / 19min / Ewingsdale (SAE Emerging Talent Award – BAS 2022)
Dir/Wri/Prod: Tomas Lynch
A deep dive into the mind of the inspiring Tommy Franklin. A Byron local, who was mentally and physically hurt by life and his reflections on the past, present and future.

The Rise / 10min / Byron Bay (Best Short Film & Audience Award – BAS 2022)
Dir/Wri/Prod: Gus Goozee
A pre-apocalyptic sci-fi drama that explores the climate crisis from the perspective of young Jonah as he navigates an unknown future where a sudden climate event threatens his whole world. The Rise is a modern day myth that speaks to the existential angst of our times and explores how the threat of environmental collapse weighs on the shoulders of our young people.

Loggerhead / 27min / Fingal Head
Dir: Matt Barwick | Prod: Sarah Jantos
An endangered female loggerhead turtle has laid her eggs too late in the season for them to be viable. They stand no chance of surviving the rapidly cooling sand temperatures. LOGGERHEAD chronicles the story of the inspiring efforts of a small village in Northern NSW, where community and various organisations come together to do everything possible to help a vulnerable species. With ingenuity, cooperation and belief, and the blessings of indigenous elders, a small village sets out to make a difference. 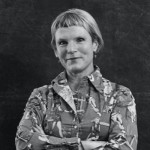 Nell is a performer and producer whose films include Guarding the Galilee (2017) and A Mighty Force (2018).

Co-curator of TEDxByronBay2021, Nell has worked on a range of projects with ABC TV, Showtime, CNN International, Channel 9, ABC Radio National, and BayFM where she hosts Road Trip.

An advocate for positive social change, she is one of Al Gore’s Climate Reality leaders and has worked with Lock the Gate, Solar Citizens and The Sunrise Project on impactful environmental campaigns. She also narrates feature documentaries such as Australia Says Yes, Project Manta, and Cuttlefish – the brainy bunch as well as popular programs like ABC’s Media Watch where she has worked for over 20 years.

Well known for her lead role in the cult classic film Puberty Blues, Nell is a graduate of NIDA where she and fellow students created the original stage play Strictly Ballroom. 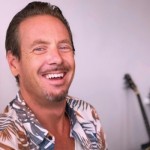 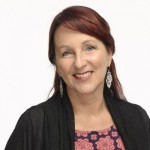 As creator, producer, and writer Deb Cox has been responsible for some of Australia’s best-loved productions. Forming Every Cloud Productions with Fiona Eagger in 2009 she added to her successful and popular work, co-creating and writing on three seasons of Miss Fisher’s Murder Mysteries, which has sold to more than 170 territories around the world.