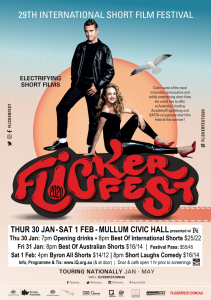 Classification: (under 15yrs to be w/adult)

Tickets On Sale Now: beside each programme above, via Moshtix (online sales close 1 hour prior to each session)
Tickets also available at the door – ‘subject to availability’
Any general or tickets enquires pls call Shane: 0414 779 881
All sessions approx 110 mins (Classification: under 15yrs to be w/Adult)

Celebrating its 29th year, Flickerfest, Australia’s only Academy® qualifying and BAFTA-recognised short film festival, and the country’s largest Australian & International short film competition, screens the best of shorts from Australia and around the globe; ensuring the presentation of A-list short film programmes recognised amongst the best in the world.

Flickerfest screens for 10 days under the summer stars at Bondi Beach from 10-19 January 2020, with selected highlights the most entertaining and innovative short films from around the world touring Australia on a 50+ venue national tour from Jan – May 2020; with Byron shire being the first screenings after Bondi.

Flickerfest is screening for its 22nd year in the Northern Rivers region in 2020 and will celebrate its 29th birthday since the festivals 1st ever screening in Balmain, Sydney back in 1991.

The Flickerfest 2020 tour will take place at the Mullum Civic Hall, screening a smorgasbord of the worlds and Australia’s best shorts over one big weekend handpicked from a record 3,600 entries near 100 countries.

Join us as we celebrate our 21th year in the Northern Rivers to launch our festival of short films in style with a fully catered opening night party including food, music & drinks from our partners Rosnay Organic Wines, Gage Roads Beer and Parkers Organic Juices.

Following the Opening Party, Flickerfest is thrilled to present its Best Of International Shorts programme, a selection of film gems from our Academy® qualifying and BAFTA recognised competition in Bondi.

Highlights include: The moving and intimate French animation ‘Memorable’ (Yoram Gross Award – Best International Short Animation, Flickerfest 2020 Bondi) nominated for the upcoming Academy® Awards, delightful German film ‘The Jackpot’ where thanks to his best friend Albert the chicken finds himself involved in a fateful game of chance that leads him to his true love and the world premiere of the thought provoking and soulful ‘Re-Entry’ from the Netherlands ‘When a man (you) dies in a traffic accident and gets into a conversation with God, he gets an answer to the biggest question of life’.

Flickerfest is thrilled to celebrate a diverse range of stories from across Australia that celebrate our unique identity and culture with our Best Of Australian Shorts programme, selected from 7 programmes in our Academy® Accredited competition in Bondi.

Highlights include: The delightful comedy ‘Chicken’ (Best Direction in an Australian Short Film, Flickerfest 2020 Bondi) by Papuan- Australian director Alana Hicks; the moving drama ‘A Day In Your Life’ a meditation on homelessness, that is quiet, thoughtful and deeply human; and the multi award winning animation ‘Rebooted’ (Yoram Gross Award – Best Australian Short Animation, Flickerfest 2020 Bondi) – It’s not easy for a movie-star to age, especially when you’re a stop motion animated skeleton monster!

Also returning is Byron All Shorts, for the 15th year presenting the Best Of Northern Rivers Shorts; encouraging audiences to experience the many amazing films & local stories that are produced in the region each year. 12 local short films will screen across this 110-minute programme which will celebrate an incredible range of themes and stories. Byron All Shorts is judged by an esteemed jury of local Northern Rivers industry practitioners. (see full programme below)

Enjoy an evening of clever comedy & chortle you way through a selection of off-kilter funny shorts from Australia and across the world with the Short Laughs Comedy programme.

Highlights include: The absurdist and hilarious Korean animation ‘Division Series’ starring Donald Trump, Kim Jong-un and other world leaders battling it out over a bucket of fried chicken, ‘Its Christmas’ starring acting legend Garry Sweet in an Australian family christmas of prawns and cricket that goes completely awry and the much loved and multi awarded comedy ‘A Family Affair’ from the UK ‘When Annabelle wakes up in a strangers bedroom on her 30th birthday, she thinks her day can’t get any worse. But then Bernard walks in’.

And the BYRON ALL SHORTS 2020 Winners are:

Home / 2.5min / Mullumbimby
Wri/Dir/Prod: Jahvis Loveday & Joy Ben Hur
A girl must leave her home town, her family, her friends. Everything she remembers that was horrible, how the town was so small, everyone knew everyone, becomes the things she will miss the most.

Daryl / 16min / Broken Head
Wri/Dir/Prod: Terry Bleakley
Daryl had been a volunteer in the local Museum and his job was to produce a pictorial history of Bangalow. Following his disappearance, the local police sergeant tracked down the history which had never before been seen by the community… with good reason. A film where history is reimagined in a very funny & eccentric way.

Finding Home / 13min / Clunes
Wri/Dir/Prod: Catherine Marciniak
Katka’s artwork is intensely personal, informed by themes of political upheaval, displacement and finding home. Not permitted to express her feelings as a child in the written word Katka’s exquisite drawings are full of codes packed with memories and story that resonate with us all.

Limitless / 9min / Mullumbimby
Dir: Hayden Griffith | Prod: Leon Morton, Henry Brydon, Danielle Said
The story of Jezza Williams, from life as a rogue adventurer to a life-changing accident that left him a C5 tetraplegic. Positivity bursts from every fibre of his being. He’s been to some dark, wild places yet it seems the journey is just beginning.

My Life To A Tee / 5min / Bangalow
Wri/Dir/Prod: Karena & Peter Wynn-Moylan
An autobiography of a life in the arts told through crew t-shirts.

Manus / 13.5min / Lennox Head
Wri/Dir/Prod: Angus McDonald
Hundreds of refugees and asylum seekers were held offshore by the Australian Federal Government on Manus Island in PNG for over 6 years:- isolated, unsupported, and separated from their families, they protest peacefully to secure their freedom. Hear the stories of the men on Manus in their own words. view Manus trailer

The Nightside / 11.5min / Bangalow
Wri/Dir/Prod: Sophie Hexter
What would you do if you inherited a cancer gene? Eight young women from around the globe talk about their experience inheriting the breast cancer (BRCA) gene. view The Nightside trailer

The Men That Come / 4min / Broken Head
Wri/Dir/Prod: Clare Sladden
A gothic allegory about the way society treats victims of violence and abuse.

Welcome To The Machine / 4.5min / The Channon
Wri/Prod: David Lowe & Eve Jeffery | Dir: David Lowe
Clara meets a machine that makes her feel like a winner. But with this machine, winning is impossible.

Don’t miss this one-off chance to see this and other amazing shorts before they continue their journey around the world; curated from the Flickerfest competition screenings at Bondi; expect to experience the best in short film-making Australia & the world has on offer.
Watch the Flickerfest 2020 Festival trailer and Flickerfest 2020 Tour trailer

Celebrating 23 years as Flickerfest festival director in 2020 Bronwyn Kidd says:
As Mullumbimby is our hometown I’m always really excited to be presenting these very exciting, entertaining and inspiring short films hand-picked for local audiences at our local tour event. Our Mullumbimby Flickerfest is both a celebration of film and a great community networking event where people who love films and great stories can come together over the weekend and enjoy inspiring films from the Northern Rivers, across Australia and the world, encouraging both discussion and connection. I’m really looking forward to it!

We will also be presenting the Best of Northern Rivers Shorts at the Byron All Shorts finalist’s screening approx 15 local finalists, selected from around 60 entries each year, showcasing a wonderful new collection of creative shorts from our very talented local filmmakers on a range of themes that reflect Northern Rivers life including surfing, music, comedy, love and everything in between.

The Byron All Shorts screens on Saturday 26 Jan, with finalists from the Northern Rivers region hotly contesting for prizes that recognise excellence in short film making.

The Byron All Shorts programme is an amazing showcase of approx 110min of the best of local short films & screened to a capacity house of over 300 people last year.

(The awards presentation is on Sunday night prior to the Short Laughs Comedy programme).

The Byron All Shorts screening is on Sat 1 Feb, 4pm,
Awards presentation is held Sat 1 Feb 8pm prior to Flickerfest Comedy Shorts.

MEET THE JURY: Byron All Shorts will be judged at the screening by an esteemed jury of film practitioners.
(The awards presentation is on Saturday night prior to the Short Laughs Comedy programme).

Poppy Walker is a director and producer, whose work explores the wonder and complexity of the human condition.

Poppy’s commissioned work includes several human rights-focused documentary shorts for agencies including Oxfam, World Vision and UN Women. She holds a BA in Arts (Journalism) from Monash University, Australia, and a Graduate Diploma in Documentary from the Victorian College of the Arts, Australia.

Russell Burton is a Senior Lecturer of Film at SAE Institute Byron Bay. Having trained as a drama director at ABC Sydney he made his directorial debut on the very successful television series Police Rescue, followed by the celebrated long-running series GP. Russell wrote and directed one of the first cooking shows, Australia on a Plate and worked extensively in Laos directing and training filmmakers while shooting a Documentary on the subject for ABC TV.

As a freelancer he directed over 90 hours of Australian Drama including episodes of Police Rescue, Big Sky, Blue Heelers, Murder Call, Water Rats, Stingers, and children’s series Pig’s Breakfast, Outriders and High 5. Russell has directed numerous TVC” s, Short Films and Music Videos and has produced and directed event film coverage of some of Australia’s major festivals such as Bluesfest, Splendour in the Grass, Mullum Music Festival and the Falls Festival.

Louise Hodgson completed a BA Hons in English Literature, Louise started her screen career in London’s Adland by producing television and radio commercials for some of Britain’s best-loved brands. 20 years ago, she moved ‘across the pond’ to work as an advertising TV producer in some of Sydney’s top agencies and production companies.

She has been a resident of the Northern Rivers region for the last 7 years where she is one of the Screenworks’ team and is responsible for the creative conception, development and execution of initiatives with a production outcome. Louise also works as a freelance AD on local productions and is developing her own production slate.